Surviving in a Male Dominated Household 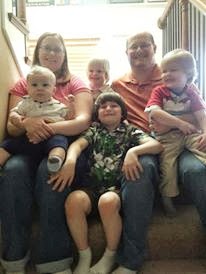 An IPod for a Soldier

While at training this last month, Dave and the other "guys" heard the story about how a soldier was "saved by his IPod". If you haven't read it, here it is...

The iPod was how Kevin Garrad found out he was shot. This is the real story.

Kevin said he got into the fight with the insurgent and afterwards he did not know he was even shot. He said he returned to his bunk after the patrol, put on his earbuds and began to clean his weapon.

He said: “you get into a ritual out there.”

No music came on. He dug around in the pockets where he kept the iPod and pulled out the twisted hunk of metal that is in the pictures. He said that was how he found out that he had been shot during the fight. He was happy that his armor worked.

He said the upgraded armor he was wearing could stop the AK-47 round. It was not the newest armor that is in Iraq now, but it was an upgrade. This was his second iPod that he had brought to Iraq. The first had been damaged earlier and the store would not replace it, even with the additional warranty he purchased.

The pictures are what happens when an AK-47 bullet hits an iPod.

Posted by Sarah Bowman at 8:55 AM No comments:

Ever wonder if I was a natural blonde? Have you met me?

All you need to do is attend one of my mom's family reunions. It is a sea of blonde. Anyway, here is a cute picture of my brother and me. I estimate I was probably about 5 and Tom was about 4 in this picture.

You have to love how Tom is sporting that tracksuit!!! =)

Posted by Sarah Bowman at 6:56 AM No comments:

Taking a page from my friend Jenna, her blog can be viewed here , she does a "Love Thursday" where she posts a picture and a story about love. So I thought I'd do that here.

As any mother will tell you, you love your child as soon as you find out you're pregnant. You love this child before you can even feel it move. When you feel you child move within you, your love grows. It's amazing how you can love something before you even see it. The trouble is, men cannot feel this wonderful gift from God growing, moving and yes, even dancing on your bladder.

But when your husband sees the child that you two have made, you see the love. The picture below was taken (by me) in our hospital room. Liam was a day old. Dave LOVED to hold Liam. I didn't change a single diaper while in the hospital. Dave took to being a dad right away.

Love is the look on Dave's face while looking into his sons eyes.
Posted by Sarah Bowman at 6:33 AM No comments:

I grew up in Glidden, Iowa. I lived in the same house from 1980 (the year I was born) until I moved out to go to college. I have one younger brother, Thomas (Tom), who currently lives in Fort Dodge, Iowa. He has two children, Mitchell and Matthew.

Tom and I are only 17 months apart. How my parents didn't pull all of their hair out is beyond me.

Mike (yes, he goes by Mike) grew up on a farm, has been and will always be a farm boy. As you can tell by his Myspace page. He works at Pella Corp in Carroll but his passion lies in farming. And International Harvesters. He's currently taking classes at DMACC to get his degree. And I think that it totally awesome. It's never too late to get an education. My dad always told me that his mother said, "Get an education. It's the one thing they can't take from you."

Sherry works as a Respiratory Therapist and LPN at a hospital. She likes spending time with her three grandsons and friends. She enjoys playing the nickel machines at Prairie Meadows, playing practical jokes on her friends and Boy George. What? Yeah. Okay, more like Culture Club. She's an AWESOME cook. She cans her own salsas, veggies, juices. I hope she and I can do that again this summer. In one phrase, my mom is the coolest mom anyone could have.

My parents are very religious folks. Mom was the President of the Ladies Guild at the church and Dad is in the choir (remember, Michael Bolton sings). When I was a kid, we basically had to be dying, in the hospital or declared clinically dead by a member of the clergy to miss mass. Every Sunday. Even while on vacation. I hope to instill the good foundation in the Church in my children that my parents gave to me.

You might be wondering why I went into the background on my parents. Well, you can't really get the full effect of who a person is until you understand more about where they came from. That's what I believe anyway.

So there's me. The first born and the only girl. I'll admit it. I was a daddy's girl. But that's okay. My brother was a mamma's boy. Each parent had their kid. =)

I was an okay student A's, B's a few C's. I started swimming in our local swim team at the age of seven. I was a fish. It was easy for me because we lived across the street from the pool. I'd always heard about how rich kids in California had pools in their backyard...well, I had one in my front yard. =) I played softball...one year. I was in right field. I was pretty good at making designs in the grass with my shoes.

I swam for...well, 11 years. I took 7 years of dance (ballet, tap, jazz, lyrical) and still manage to trip on my own feet. But I can do the splits. It's too bad I can't add that to my resume. I was a cheerleader, ran track for a few years, dance team and choir. I looked like the "All-American" chick. I was the "nice girl" who finally grew into her looks (and grew boobs) her junior year of high school.

When I graduated high school, I attended Iowa State University and was a Psych major. I was going to be a family therapist. Funny how things work out. Let's just say I learned A LOT about myself my first two years at Iowa State. I moved back home, worked at Pella Corp that summer, went to DMACC in the fall and was involved in Community Theatre. I played Sister Mary Paul in "Nuncrackers". I graduated from DMACC (with honors) with an Associate Degree in Liberal Arts. I was inducted into Phi Theta Kappa. I worked as a waitress (server) my last semester there. I worked at American Home Shield the next summer before heading back to Iowa State. I had decided to change my major to English after taking a creative writing course at DMACC. I had always loved to write, and I had a prof who told me I wasn't allowed to preface any of my readings with "this isn't very good, but..". She gave me a lot of encouragement, so to thank her, after being inducted to PTK, I nominated her for the "Who's who best teacher" award.

At Iowa State, I learned a lot about buckling down and studying hard. I had a good time too, don't get me wrong, but I really enjoyed my last two years at Iowa State. I had above a 3.0 each semester as well. I even took 12 credits over the summer! I worked for the Iowa State Daily as an opinion columnist. I got paid to piss people off and tell them what I thought. It was a great job. I also worked for the Republican Party of Iowa that fall. I finally graduated in December of 2002.

Let me also state that I wasn't always a Republican. In fact, I was a registered Democrat when I applied for the RPI job in the fall of 2002. Everyone back home was a Democrat. And Kennedy was a Democrat, and he's Catholic...so I should be too, right? Wrong. After 9/11, I really got to thinking. I was really a Republican at heart and I let it show in my opinion column. That was a lot of fun.

After graduation I went to work for Chuck Gipp, who was the Iowa House Majority Leader at the time. It's funny how rumors spread back to Glidden. I went back for the weekend and was out at a club. Someone had come up to me and asked me how long I was going to be home for. I told him I just came home for the weekend. He couldn't believe that...the flights must be so expensive for me!! I didn't know what he was talking about, and later found out that people were saying I'd gone to work in D.C. Um..no. D.C. is not Des Moines.

I learned a lot about the legislative process (and even more about politics) while working there. I had a job lined up working for Chuck Grassley's re-election campaign. I worked on the Campaign from May of 2003-November 2004. I was sad when it ended but I had made a lot of great friends, met many cool people and learned a lot.

I also met David in January of 2004. Little did I know he was going to be my husband!!

I went to work with Citigroup in January after doing some temp work in December. We found out we were expecting in March of 2005 and our son William (Liam) was born in November of 2005.

David proposed during labor (he's always got interesting timing for things) but offically proposed on Christmas night 2005. We were married on October 7, 2006.

I now work for the Agribusiness Association of Iowa and I volunteer as Co-Chair for the Polk County Republicans.

That pretty much brings you up to speed on where I am right now. Now if I could get David to write something about himself. =)

A little bit about us...

Well, if you're reading this blog, you've either run across David or I at some point in your life. In the next few blogs, I will give you a little background if you're new to us...and if you're not, you might just learn a thing or two.
Posted by Sarah Bowman at 9:03 AM No comments:

Email ThisBlogThis!Share to TwitterShare to FacebookShare to Pinterest
Labels: intro

Well, we did it. We've created a blog. I figured this would be a good place for me to post items about Dave's deployment as well as updates on our pretty boring life. =)

Welcome readers!!
Posted by Sarah Bowman at 8:47 AM No comments:

About the Estrogen in the House

Sarah Bowman
Graduate of DMACC and Iowa State University. AA in Liberal Arts and Bachelor of Science in English with an emphasis in English Literature. Worked in politics for the Iowa House Majority Leader and as Communications Director for a US Senate Campaign, as an editor for an Agriculture Association, Principal Financial Group, Communications Director for CAPE PAC. I now a work at home mom blogger, writer and Public Relations/Political Consultant. Contributing writer for Yahoo! News. Writes www.iowabowman.blogspot.com and co-authors www.mommysrecess.com. Previously served as the Co-Chair of the Polk County Republican Party and remains involved in Dallas County Politics. Volunteers as Public Relations Contact and Investigator for MPIS. Teacher of Faith Formation at St. Boniface. History nerd. I am married to an Iraq war vet and the mother of four boys, ages 8, 5, 3 and 1. We have a male cat...well, he was a male at one time. I am a daughter, a sister, a wife, a mother, a mentor and a friend.

People Who Enjoy Reading About the Testosterone

Websites Where We Waste a lot of Time